We will be just a bit warmer today with highs in the upper 40s but once the cold front passes later today and into tonight we will see the chance for some light snow and flurries. Substantial accumulation isn’t expected as moisture is relatively limited but nonetheless we will see a very cold Friday with highs in the low 30s. This weekend looks to be cold as well but we should warm into the 50s by next week.

Temperatures across the Four States this morning were in the low 20s making it very cold. Thanks to a relatively light southwest wind we also saw wind chill values in the teens this morning making it feel even colder in several areas. With kids headed to school make sure they bundle up because actual temperatures will be in the mid to upper 20s but with those wind chills it will feel even colder.

The cold front set to pass through the area is currently off to our north and west generating some snow in Nebraska. This front will push into the area later today and into the night where we will see the possibility for some light snow and flurries behind the front but substantial accumulation is not expected due to probable lack of low level moisture. This front will pass and leave us with cold northerly flow for Friday and into our Saturday where another front will begin to approach the area. This front will push through Saturday and generate another cold night for Saturday night. However in the next 8 to 14 days we will begin to warm above average which will be a nice change of pace.

Today expect a high around 48 where we will be a bit warmer before a cold front move through later in the day. Tonight we will see a low of 23 where we will be very cold and have the chance to see some light snow and flurries. The cold will last through the weekend but by next week we should warm into the 50s. 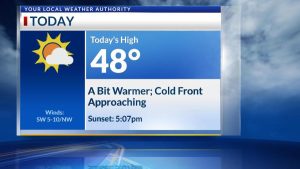