MAMI, Okla.  – Judges for the 13th District were sworn in on Monday at the Ottawa County Courthouse.

Before a standing room only filled with former prosecutors, judges, attorneys, and law enforcement officials, the Honorable Jennifer McAffrey was sworn in as District Judge for Delaware and Ottawa counties.

“The people of Oklahoma should know they have the finest core of judicial representation,” said retired Oklahoma Supreme Court Justice John Reif, who administered the oath of office to McAffrey.

Special Judges Nick Lelecas and Becky Baird and judges from Mayes, Rogers, Osage, and Nowata counties were sworn in by Reif for their second term as judges. 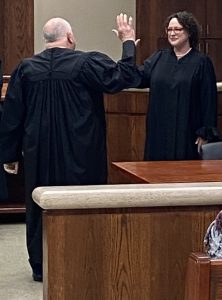