LABETTE COUNTY, Kans. — After a six-year court battle, a Labette County man is sentenced for sex crimes against children.

Bybee originally faced 34 charges of sex crimes that included four counts of aggravated criminal sodomy, 24 counts of sexual exploitation of a child, and six counts of criminal sodomy between a person and an animal. He pleaded guilty to two of those charges in April 2022.

The Kansas Attorney General said Bybee’s, and co-defendant Sasha Bruner’s, victims were children under the age of 10.

Bybee was charged under “Jessica’s Law.” The law is named after Jessica Lunsford, a young Florida girl who was kidnapped, raped, and murdered in February 2005 by John Couey, a previously convicted sex offender. The law substantially increases the penalties even for a first-time offender with no prior criminal history. In Kansas, it means Bybee will serve a mandatory minimum of 25 years without possibility of parole when convicted of a specified sexual assault on a child under the age of 14 if the convicted person was over 18 at the time the crime was committed.

The case stems from incidents dating back to 2013. Bybee was originally charged in 2016 and Bruner in 2017. Bruner pleaded guilty in 2018 and was sentenced to 15 years in prison. She pleaded guilty to rape and sexual exploitation of a child for possessing child pornography.

Bybee’s case went through a number of defense attorneys, a judge’s retirement, a claim of mental defect and then COVID.

He will be eligible for parole in 25 years. 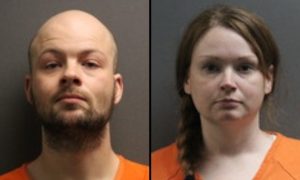