KSNF — “Good grief!” If you don’t remember seeing the Peanuts specials “It’s the Great Pumpkin, Charlie Brown,” or “A Charlie Brown Thanksgiving” on television this year, it’s because they weren’t. And “A Charlie Brown Christmas” won’t be aired on broadcast or cable channels for the foreseeable future.

In December 2018, Apple gained the rights to publish Peanuts content according to Apple Insider and this source here. In October 2020, Apple released this statement announcing the company would host all things Peanuts on the streaming platform Apple TV+.

In 2021, PBS aired the beloved Peanuts Halloween, Thanksgiving, and Christmas specials for free for the last time. Last September, the PBS Kids Twitter account announced they no longer had the rights to the Peanuts specials.

However, you can still watch Charlie Brown as he discovers the true meaning of Christmas on the Apple TV+ streaming platform even if you don’t have a subscription. Between December 22nd and Christmas Day, Apple TV+ will stream the beloved special for free, says Apple. You can view it via the Apple TV app on your phone, smart TVs, or stream it online here.

If you’re not a subscriber and want to watch it ASAP, a subscription is $6.99/month and starts with a 7-day free trial. You can set that up by following this link here.

Peanuts comic strip was initially published under the name “Li’l Folks,” and was renamed “Peanuts” in 1950. The first Peanuts animation aired on television on December 9th, 1965. 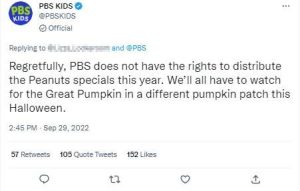