There were a total of 414 crashes over the “Thanksgiving Holiday Counting Period.”

Eight people died in those crashes, and 115 were injured.

The agency did not respond to any boat crashes, but did report two drownings.

Overall, numbers were down from what troopers saw during last year’s counting period. 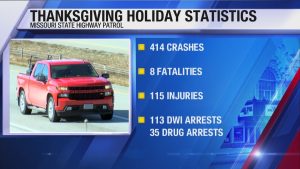