GROVE, Okla. – Two signs with unknown meanings were left as possible calling cards on a Grove statue that was vandalized.

Criger said the sculpture was carved out of the top of a tree and at the base of the tree was the letter “A” spray painted with a circle around the letter.  Earlier someone had paced a “purple and green sign with a joker card” at the tree, Criger said.

The words “Ha Ha Ha” and “Get Rid Of The Bat Man!” and “Not my Tree!!” were handwritten on the sign.

“We don’t know the value of the sculpture,” Criger said.  “In some ways it’s priceless.”

A city beautification project used five trees in the downtown area that were designated to be removed. Different sculptures were on the other trees, he said.

The eagle sculpture was completed on Nov. 23 by Richard Quick using a chainsaw, Criger said.

“The sculptures had to do with Grove and Grand Lake,” Criger said. “They were unique to our downtown area.”

If anyone has information about the vandalism, please contact the Grove Police Department at (918) 786-6121. 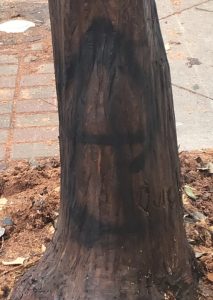