(KSNF/KODE) — The ice storm is one of the nastier winter weather events that occur with unfortunate frequency in the Four States. These storm systems are associated with extended periods of well below normal temperatures that plague the Plains states, following the arrival of Arctic outbreaks. The stage is set for an Arctic outbreak, when the high speed, upper level winds that stream from west to east across the Northern Hemisphere in the mid latitudes, basically shift to a more, north to south configuration. When this happens, temperatures can become extremely cold because air is not streaming into the middle of the nation from a mild source region, such as the Pacific Ocean; but rather the frigid, north pole.

The arctic cold front is the most feared during the winter season because these fronts can produce well below normal temperatures. The Four States last suffered the impacts of such an outbreak in mid-February 2021, when temperatures never warmed above freezing for almost two weeks.  And, at the height of that brutal cold wave, Joplin’s high temperature struggled to reach 1°F, while the next morning’s low dropped to -15°F, on February 16th. These, ridiculously cold air masses are so dense, they often defy the thermodynamic schemes utilized in numerical weather modeling to such a degree, that the models have difficulty correctly predicting the coldest parts of an outbreak.

Once the cold air is in place, that’s when an area of low pressure strengthens over central Texas and begins pulling increasingly warm and moist air from the Gulf of Mexico, on top of the very shallow, cold air already in place across Oklahoma, Kansas, and Missouri. Temperatures in this warm layer, or warm nose, as meteorologists like to define it, can be as warm as 50°F; which is well above what is necessary to melt snowflakes falling into this layer, from much colder air above the warm nose.

When these relatively warm, rain drops fall into that shallow, sub-freezing air mass hugging the ground, they immediately freeze in contact with elevated surfaces such as tree branches and power lines; even if temperatures on these surfaces are just a degree below 32°F. And, it only takes 0.25” of ice accumulation to start bringing down tree limbs and power lines. When accumulation increases to approximately 0.50” it can add as much as 500 pounds of weight to a one-thousand foot span of power line. And, another thing to consider is windspeed.  If windspeed is just a little above 10 mph during an ice storm event, the impact will be catastrophic storm damage; resulting in widespread power outages due to the added force of the wind on tree branches and power lines.

The reason ice storms occur with unfortunate frequency in the Four States, is not only due to the region’s proximity to the warm waters of the Gulf of Mexico, but also that large mass of high terrain in the western U.S. we call the Rocky Mountains. This continental divide helps to contain those chilly polar and arctic air masses as they surge south through the Plains states. Additionally, this lengthy expanse of higher terrain “protects” these frigid, dense air molecules from modification due to that warmer air streaming across California from the Pacific Ocean. With this wall of protection, those extremely cold Arctic intrusions into the center of the nation can hang around just a little while longer while they await the arrival of the next “ice storm generating”, low pressure system.

Ice storms are scary things, they can create dangerous power outages for extended periods during the coldest parts of winter, and bring every form of transportation to a standstill. You may be aware that our weather forecast includes the arrival of our first arctic cold this Thursday night; with high temperatures struggling to reach the freezing mark on Friday. The good news for Four States residents is that there won’t be any ice storms utilizing this cold air mass for wintery mayhem this weekend. In fact, it will be much warmer next week for our Thanksgiving holiday! 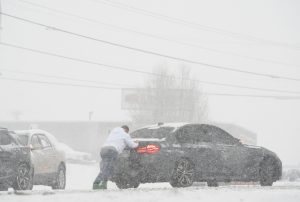