GROVE, Okla. – A 46-year-old time capsule was unearthed on Monday by Grove workers as they were preparing the ground for the community’s new skating rink.

“The artifacts were likely placed in the time capsule in 1976 by the Grove Girl Scout troop to celebrate the country’s bicentennial,” said Debbie Bottorff, Grove city manager.

The time capsule was buried on the community center’s front lawn close to where a flagpole once stood,” she said.

City workers worked for over an hour chipping away at the large monument flagpole base with heavy jack-hammer type machinery.

Excavation Unlimited, a Grove company, arrived at the site with heavy equipment and started picking away revealing decades-old secrets.

The 1976-dated newspapers were water-soaked and had mold and mildew.

“Everything had to do with the bicentennial,” Bottoroff said. “There were several paper documents, including newspapers, a Grove School Board pamphlet, a local diner’s menu, and maybe a Readers Digest.”

Other items included coins, a license plate, two bicentennial pins and a bicentennial coin that was made into a necklace, a limited-edition bicentennial plate that appeared to be commissioned by Grove city leaders, photograph negatives, and a container that held broken glass.

“It was possibly a perfume bottle,” Bottoroff said.

Bottoroff said she plans to reach out to the Girl Scouts but she said she isn’t sure how to store or display the items.

“Most of the papers are destroyed,” she said.

Bottoroff said she learned there is another time capsule buried at the same spot.

The other time capsule was from the Grove Class of 1970 and was to be opened in 2020, possibly at the school’s 50-year reunion. But COVID hit and the reunion was canceled.

“We are seeking people who have lived during that time or are part of the Class of 1970 that might know exactly where it is located,” Bottoroff said. 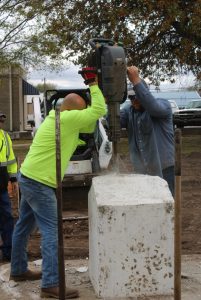