Instead of pulling over, the driver lead Deputies on a pursuit, South on Main Street, before coming to an end in a residential neighborhood alley, near D Street and Sergeant Avenue in Joplin. Sheriff’s Deputies were able to pin the vehicle between several homes.

| Large Traffic Increase On Missouri Interstates – Want To Know Why? >

The driver then complied peacefully with officers, and exited the car. That person was taken to the Jasper County Jail. The name of the driver is not being released at this time. Fortunately, nobody was injured during the pursuit.

Because this is a developing story, we’ll have more information when it becomes available. 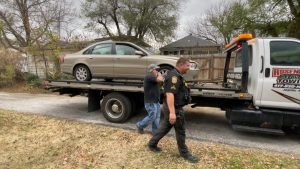