We have started our Halloween with some light rain and fog but the weather should become much nicer by later today. Above average temperatures are likely this week where we could see 70s for several days. This will be the precursor for what looks to be a strong system moving through by the end of the week.

Temperatures this morning are in the upper 40s and low 50s. Dewpoints are sticking close to temperature values and because of this we could see fog in many areas across the Four States as we are saturated.

With the kids headed off to school we are going to see plenty of clouds across the Four States and cool temperatures in the 40s and 50s so you might want to send them off with a hoodie or jacket this morning. For tonight as we celebrate Halloween expect a nice night for tricks and treats all around as we will see a clear night and cooling temperatures.

The occluded low that brought us rain this weekend is moving off to the north and east where it is set to dissipate. We should see high pressure take its place and control our weather pattern for the next few days with plenty of sun for several days and a southerly wind to warm us up. This wind could get breezy by mid-week thanks to a surface pressure gradient.

November looks to have a warm start as we are likely to see above average temperatures for the next two weeks in the Four States.

For today expect a high around 70 with clouds decreasing and sunshine by the afternoon. Tonight expect a low around 46 with clear and calm conditions which should make for good trick or treat weather. In the next several days we will see temperatures in the 70s before a more impactful system moves into the area by late week. 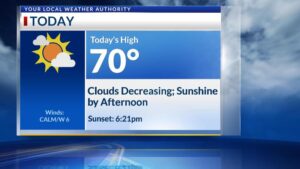