SENECA, Mo. — Ty Dawson’s life is all about service. As the lead pastor at Seneca Bethel Baptist, he serves his God. As a firefighter for the Redings Mill Fire Protection District, he serves his community. As a husband and a father, he serves his family. But, there’s one more area of service that Dawson has dedicated his whole life to doing, and that’s horseshoeing.

As a farrier working from his own shop, Dawson practices what some would consider to be an artform. “During the 1800’s, back before we had vehicles, we were using a horse drawn buggy carriage. I have several blacksmith books from around that time and a lot of the same techniques and stuff that they did then still holds true today. As a farrier, we still use those things and those same methods. Since that time, we have learned a lot more about horses and better ways to do the job of horseshoeing, but the principles still remain the same.”

| Seneca Man Devoted To Service As Both A Pastor And Firefighter >

Although most of what he practices as a farrier was learned from his father, Dawson also attributes his knowledge of horses to when he was a shoeing apprentice. The job of horseshoeing, he says, is one of continual learning.

“I enjoy the hard work and I enjoy the art of it. I’ve always been someone who loves the artistic side of things and there’s definitely an art to horseshoeing and building shoes.”

You can read more about Ty Dawson, including how he’s able to divide up his time between being a church pastor and a full-time firefighter, HERE. 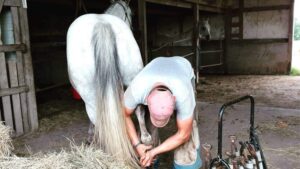