MISSOURI (KSNF/KODE) — Missouri is just one of a handful of states receiving funds to help with the fight against distracted driving. The Governor’s Highway Safety Association (GHSA) along with General Motors (GM), is providing a total of $210,000 to seven State Highway Safety Offices (SHSOs) to help combat the problem of distracted driving. Missouri along with six other states will receive $30,000 to put in place the recommended actions outlined in this comprehensive report released by the GHSA and GM.

The National Highway Traffic Safety Administration (NHTSA) says that distracted driving is rampant in the United States, and estimates more than 3,000 people died in distraction-related crashes in the U.S. in 2020 (the most current year for which data is available). Another 400,000 people are injured annually. However, the NHTSA says the actual numbers are much higher due to underreporting.

The funds will enable State Highway Safety Offices to test new initiatives and expand successful programs. This will include working with survivor advocates to put a face on the distracted driving problem, collecting stronger data to advocate for enhanced laws and educating the youngest on the road to help make distracted driving unacceptable.

“This is the perfect time of year to launch these initiatives. The sun sets earlier, so it is
imperative that drivers keep their eyes and minds on the road, and their hands on the wheel.
Our most vulnerable road users – children trick-or-treating or walking home from after-school
activities – are in particular danger due to distracted drivers. We’re thrilled to be working with GM to support these critical state programs,” said GHSA Executive Director, Jonathan Adkins.

Each of the seven states receiving the funds will use it in a variety of ways. In Missouri, the state’s Department of Transportation plans to use the $30,000 to broaden its “Buckle Up Phone Down” program by working with three groups: Elementary school-age children, high school students and employers. Understanding that distracted driving occurs across all ages, MoDOT believes the campaign will reach a broad range of Missourians.

“Buckle Up Phone Down” Day

For the sixth year in a row, the state of Missouri is declaring Friday, October 21st, as “Buckle Up Phone Down” Day. MoDOT and the Missouri Coalition for Roadway Safety, along with various safety partners, schools and businesses throughout the state, are encouraging better driving behaviors.

This year’s Buckle Up Phone Down Day is aiming for zero traffic fatalities throughout the day. Missouri’s 2022 Seat Belt Usage Survey showed 89% of vehicle occupants use a seat belt, matching the highest rate the state has ever recorded. However, the unbuckled 15% make up a majority of the state’s roadway fatalities, which reached a 15-year high in 2021. Over half of the distracted driving fatalities in Missouri that year claimed the life of someone besides the distracted driver.

Since the program began in 2017, the BUPD movement has spread steadily across Missouri. More than 20,000 Missouri individuals and businesses have accepted the BUPD challenge, and more than a dozen other states are actively sharing the messages along their highways.

Missourians can accept the challenge to BUPD, HERE and spread the word on social media using the hashtags #BUPD and #BUPDDay. 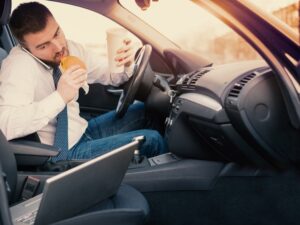