VERNON COUNTY, Mo. — The man involved with a weekend pursuit through multiple Missouri counties after a hit-and-run crash is identified , the Vernon County Sheriff’s Office said.

Brenton Lee Ross, 32, of Kansas City, Missouri was arrested and charged in the incident, which took law enforcement through Vernon, Barton, and Cedar Counties on Saturday. Prosecutors have charged Ross with the following:

In a Probable Cause Statement filed in Vernon County, officials say Ross left his Missouri Driver’s License in the Dodge Challenger he originally crashed. This was the first of three vehicles Ross crashed that night, which also include a stolen Chevy Suburban, and a flatbed pickup.

After Ross crashed the Dodge Challenger, he fired multiple shots at a Barton County Sheriff’s deputy when she attempted to arrest him. She was not injured in the gunfire. Ross then took off on foot and was captured on field-game cameras in the area. Officers say Ross then stole the Chevy Suburban, and was located again, this time by Vernon County Deputies.

Police say after stealing another vehicle, this time a flatbed pickup, Ross drove the truck into a deputy’s patrol car.

A Missouri Highway Patrol helicopter was able to assist and locate Ross after he ran from the crashed pickup truck and he was finally brought into custody.

More details on the incident are listed on this Probable Cause Statement filed in Vernon County Circuit Court.

Ross has an extensive criminal history, also detailed in the Probable Cause Statement. He remains in custody without bond. A bond hearing is set for later this week. 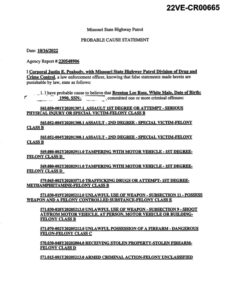