RALEIGH, N.C. (WNCN) – Five people have been killed, including an off-duty Raleigh police officer, in a mass shooting in Raleigh on Thursday.

An additional two individuals were shot and sent to the hospital with injuries. One of the two injured is a Raleigh K-9 officer, according to Raleigh Mayor Mary-Ann Baldwin.

“Just after 5 p.m. today multiple people were shot on the Neuse River Greenway near Hedingham subdivision,” Mayor Baldwin said in a public statement just after 9 p.m.

As of 8:13 p.m. Thursday, Raleigh police Lt. Jason Borneo confirmed the male juvenile suspect had been contained. Police told CBS 17 that the active shooter suspect they were searching for was a 15-year-old.

During an initial media briefing at approximately 9 p.m., it was confirmed he was contained inside a home.

“[The] Raleigh Police Department has confirmed five fatalities. One of them was an off-duty Raleigh police officer. Two others were also transported to the hospital. One is a Raleigh police K9 officer. Thankfully he did not have life-threatening injuries,” Baldwin said.

Police sources confirmed the officer killed was in the area of McConnell Oliver Drive and Tarheel Club Road. Mayor Baldwin confirmed the total number of fatalities at five during the media briefing just after 9 p.m. Thursday.

In her comments, the Mayor also said, “We must do more.”

“We must stop this mindless violence in America. We must address gun violence. We have much to do and tonight we have much to mourn,” she said.

Significant police presence was first reported in the area of the Neuse River Greenway just after 5 p.m. near Osprey Cove Drive and Bay Harbor Drive in northeast Raleigh.

Police further advised at 5:40 p.m. that all residents in this area remain in their homes and to contact 911 if they see anyone or anything suspicious.

As of 6:50 p.m., Raleigh police also asked residents in the areas of McConnell Oliver Drive, Tarheel Club Drive and Old Milburnie Road to stay indoors. Drivers were asked to avoid the area as Milburnie was also shut down.

Lt. Borneo said at 9:37 p.m., the 15-year-old suspect was taken into custody by the Raleigh Police Department. He also said one person is in critical condition and the K-9 officer who was shot was released from the hospital.

“I have spoken with Mayor Baldwin and instructed state law enforcement to provide assistance responding to the active shooter in East Raleigh. State and local officers are on the ground and working to stop the shooter and keep people safe,” Gov. Cooper tweeted at 6:54 p.m.

He later showed up at a press conference with the mayor at 10:45 p.m.

“Tonight terror has reached our doorstep. The nightmare of every community has come to Raleigh,” Gov. Cooper said.

Officials confirmed that police had secured a perimeter around WakeMed Hospital where multiple victims were treated. The condition of victims outside of the two Raleigh officers shot has not been released as of 4 a.m. Friday morning.

“As our community grieves the startling and tragic  acts of violence this afternoon, multiple law enforcement agencies are working to secure the scene, to identify all the victims and make necessary notifications to loved ones, and to begin to answer the tough questions of how this could happen in our community. As law enforcement and our office begin to put together the pieces, we appreciate the patience of the public. As authorities are in a position to share more publicly, information will be released. Over the next several days and weeks, we will be working collaboratively with our public safety partners to attempt to answer the many questions we all have and to seek justice for our community. With the suspect in custody and the threat now ended, our community should for tonight turn its focus to the families that have lost their loved ones. My heart goes out to them.”

Raleigh Police will address the media on Friday at 8:30 a.m. Police said the investigation is active. 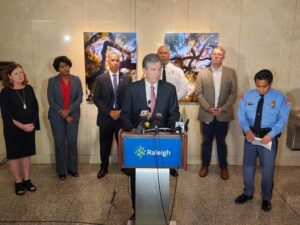