MISSOURI — Because of wild animal movement in the fall, it is not uncommon to see more dead deer and other wildlife along the nearly 34,000 miles of state roads. The Missouri Department of Transportation reminds motorists that there are several options that can be taken when a deer/vehicle collision results in the death of the animal.

If the deer is completely off the roadway, MoDOT will not pick it up unless it impedes mail delivery or is in a neighborhood, especially at or near a bus stop. If a deer is located on the shoulder, MoDOT will address the deer during normal work hours. MoDOT crews are not called out after hours to remove an item unless it is a road safety hazard. MoDOT does not have specialized crews assigned to remove dead animals from the roadway and does not contract out any roadkill removal.

| Hunter Safety Course A Good Idea For All Firearms Hunters >

Missouri has creeped up a notch in state rankings for deer collisions. According to a report from State Farm Insurance, the Show-Me State now ranks 14th in the country for potential animal collisions, which is up from number 15 last year — with a 1-in-74 chance of hitting an animal while driving.

“Fall is breeding season and deer are on the move, especially in the dark as days grow shorter. Although deer strikes can occur at any time, the majority of these crashes occur in the twilight hours before sunrise and just after sunset in October and November, with the largest number taking place in November,” said Missouri State Maintenance Director, Natalie Roark.

According to 2021 statistics from the Missouri State Highway Patrol, drivers in Missouri experienced 3,779 traffic crashes where deer-vehicle strikes occurred. One deer strike occurred every 2 hours and 18 min in the state. In these crashes, there were three fatalities and 420 people were injured.

The Missouri Department of Transportation (MoDOT) says that drivers should never swerve to avoid animals in the road, as it can cause loss of control of their vehicles, resulting in serious injury or death. To avoid hitting a deer, always be cautious and keep your eyes scanning both sides of the roadway. MoDOT also says to not jeopardize your safety to remove an animal in a high traffic area. They suggest you notify MoDOT at (888) ASK-MODOT or (888) 275-66368. You can also visit MoDOT’s website, HERE. 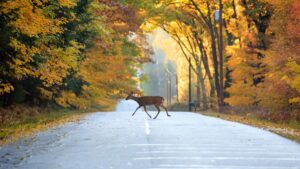