JOPLIN, Mo. — A first of its kind, battery powered boat is taking to America’s waterways.

The Boka e-boats utilize a fiberglass frame technology and are powered by an ultralight three horse power, battery powered motor (which is rechargeable) that can propel the watercraft to a top speed of around six miles per hour.

Boka Marine says a fully charged battery can provide up to four hours of powered operation.

The price tag for a Boka e-boat is listed at $7,999.99, but the company offers several add-ons that can be purchased separately such as an extra battery, a built-in cooler, canopy, table, storage cover, trailer and a solar powered electronics package that includes Bluetooth speakers, interior lights, navigation lights and LED accent lights.

Every e-boat is made to order and constructed at Able Manufacturing and Assembly in Joplin.

“The public response to one of the first battery powered boats on the market has been a positive one,” said Tyler Tucker with National Composites.

Since the Boka Marine e-boat was launched at the end of summer, Tucker says most people interested in purchasing one are waiting until next year.

“We are definitely getting a ton of inquiries since we launched at the end of August. We have actually sold several of them already, but most people are wanting until next summer to buy one. Many that have inquired say they plan to call back then and purchase one,” said Tucker. 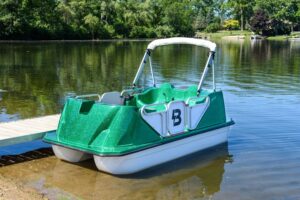