A 17-year-old man was fatally shot during the Tulsa McLain and Miami High School football game in Tulsa on Friday night.  Tulsa police have not released any names.

The Quapaw Tribe was one of 16 American Indian tribes selected to join the Tribal Access Program program.

Micaela Renee Venis, 47, of Fairland, is charged with felony discharging a firearm into a dwelling, possession of a controlled dangerous substance – marijuana and carrying firearms while under the influence.

Michael MciLroy, 62, of Newark, Ohio was driving a 1998 Harley Davidson motorcycle on Sunday when his jacket became tangled up in the motorcycle’s rear wheel.

Colin Raye Kirk, 28, formerly of Loma Linda, Mo. is held over for trial in Newton County. 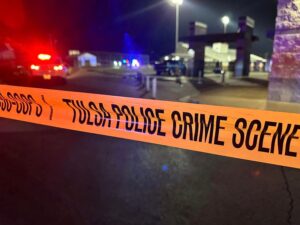