It’s the most ever paid for any sports item or memorabilia.

The record previously belonged to a 1986 World Cup jersey that was worn by Diego Maradona, a soccer player from Argentina.

Heritage Auctions, which sold the Mickey Mantle rookie baseball card, credits the card’s extremely high price to the condition it’s is, which is described as “pristine,” along with its well-documented history.

The very rare Mickey Mantle card was part of a series released by trading card manufacturer Topps in the summer of 1952.

However, the baseball cards did not sell as well as the company had thought.

In 1960, Topps owner Sy Berger was in need of extra storage space and decided to dump the unsold cards into New York’s Hudson River.

But, not all the cards ended up in the river.

In 1986, sports card dealer Alan Rosen got a call from a Boston resident who claimed to have a case of the 1952 Topps baseball cards.

His now-deceased father, a delivery driver, had saved a box of the baseball cards and stored it in the basement for 30 years.

Alan Rosen purchased the collection and sold it almost immediately for $1,000.

Six years later, Rosen repurchased the Mickey Mantle baseball card for $40,000 and then turned around to sell it again for what was then a record price of $50,000.

Giordano held onto the card for 30 years before deciding to put it up for auction this year.

Mantle is one of baseball’s greatest switch hitters and biggest stars, and though he is a New York legend, it all started in a small town in Oklahoma.

The baseball star was born in 1931, in Spavinaw, Oklahoma, and the family moved to Commerce, Oklahoma when Mickey was still very young.

His father, Mutt, worked at the zinc mines in the town and every evening, he would pitch balls to Mickey, next to a old tin barn on their property, as did his grandfather Charlie.

Today, baseball fans can stop by the town to see the player’s childhood home, and the shed that served as the backstop where the “Commerce Comet” learned to hit from both sides of the plate. 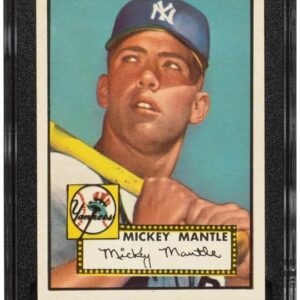