JOPLIN, Mo. — Joplin has seen more and more murals popping up in recent years – and even smaller public art projects like a series of hometown hearts. It’s literally the heart of Joplin.

“Each painting takes like seven hours, seven to 10 hours to do. So it’s a one-day project. I’ve done some public art that can take 40 hours. So it’s nice to be able to do something that actually you can get finished in one day,” said Haun.

But the Joplin heart didn’t start out as a heart, but something more basic.

The Joplin heart is also it’s own sticker – and tops the latest version of the Downtown Map, drawn by Haun.

“It’s really been a cool draw. We’ve been getting into the visitor’s guide as well as our website because people who love public art, they love being able to take the picture in front of something that is truly of the town that they’re from so it says ‘Joplin,'” said Tuttle.

Haun will start on heart #20 this weekend at Wildcat Glades, just the latest addition.

“I’ll do these hearts as long as I can until I can’t do anymore. Really? I just think it’s a wonderful thing. It’s cool to create something that can outlive me,” said Haun.


What do the ‘Joplin Hearts’ mean? 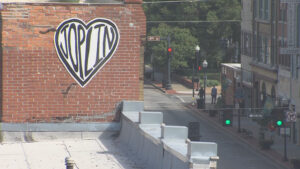