JOPLIN, Mo. — The replacement of a Joplin bridge is “well underway” nine days after the city began it’s work on the project.

In an update posted by the Joplin City Government on Facebook, an aerial photograph shows the current work done on the Rangeline Road bridge (below).

The bridge, which closed on September 6th, is to be replaced with a new one that will be two feet higher, 15ft wider, and 27ft shorter than the previous structure. You can view pictures of the old bridge below:

Originally set to begin on July 18th, the project was pushed back to the later September date due to scheduling issues. The $6.2 million cost is funded through Governor Parson’s bridge focus program. 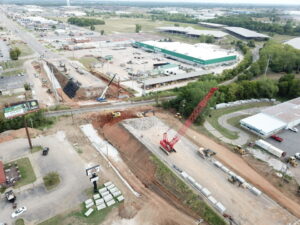