JOPLIN, Mo. — Although it’s known as the “Czech Republic” now, that wasn’t always the name of the eastern European country. Some of the country’s old art is part of an exhibit inside Missouri Southern’s Spiva Art Gallery. From the end of World War II to the Fall of the Iron Curtain in 1989, the country was communist and known as “Czechoslovakia.” It was under the control of Russia, and all aspects of life had to strictly conform to communism — including art.

Some of those pieces are part of this display.

“The artists in that country was forced to basically adopt social-realism and propaganda art. Art that would glorify some other entity besides their actual homeland, so this show is a series of artists who secretly made artwork that did not conform,” said Frank Pishkur, MSSU Professor of Art.

The exhibit also includes information panels and a video presentation. 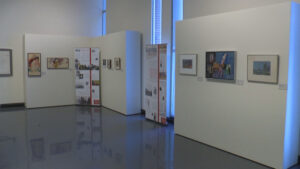