SENECA, Mo. — Tonight is known as “Gold Out Night” at the Seneca high school football game, where the Indians take on the Fighting Irish of Springfield Catholic.

September is Childhood Cancer Awareness month, which has become meaningful to the Seneca community.

Tonight (9/2), those in attendance at the game took time to not only raise awareness for childhood cancer, but to pay tribute to “warriors” both past and present.

Childhood cancer has been labeled as being rare, but the numbers show that’s not the case.

Globally, a child is diagnosed with cancer every 80 seconds.

In American, 1 out of 6 children with cancer will not survive five years, as cancer is the number one cause of death by disease for children.

The community of Seneca recently experienced this with the loss of one of their own: Sydni Brown.

Those who knew her well say Sydni was a fun-loving girl with a smile and personality that would light up a room.

Sydni’s mom, Darci Brown said she loved to watch Teen Disney shows and would crack up at their silly style of humor.

Sydni also had a growing passion for cheer.

In May of 2018, at the age of 9, Sydni was diagnosed with a rare form of childhood sarcoma cancer that was already in stage 4 at the time of her diagnosis.

After a strong and courageous fight, Sydni’s battle of over 2 years ended, as she passed away on September 22nd, 2020, just a couple months after celebrating her 12th birthday.

Prior to the start of tonight’s football game, over 2,000 gold balloons were released by those in the crowd and the players on the field.

The balloon release was to represent the 1 out of every 6 children, like Sydni, that didn’t survive their battle with cancer.

Before the balloon release, a moment of silence was held.

In honor of Sydni’s bright smile and joyous spirit, her parents, Nathan and Darci Brown, stared a nonprofit organization called “Sydni Smiles” in April of 2021.

Their goal with Sydni Smiles is to raise awareness for childhood cancer and the funding needed for its research, as well as to provide support and resources to families affected by childhood cancer.

Those students not only battled childhood cancer, but beat it and continue to fight every day in true “Seneca Warrior” fashion. 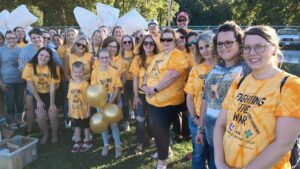