Registered voters in Delaware, Craig and Ottawa counties have the option of voting Thursday and Friday from 8 a.m. to 6 p.m. and on Saturday from 8 a.m. to 2 p.m. at the respective county election board office.

The race for District 13 District Attorney’s Office race is between incumbent Kenny Wright, of Grove and Doug Pewitt, of Monkey Island.

Vinita residents will vote on whether to make the police chief an appointed position by the mayor with the approval by the city council instead of an elected position.

Baring a runoff, the winner of the District Three race is the elected official since no Democratic candidate filed for office.

Delaware County residents will decide whether to extend a half-cent sales tax to help with the upkeep and maintenance of the county’s roads and bridges.

In the State Representative race, incumbent, Josh West, R, of Grove, faces off against challenger Tamara Bryan, R, of Pryor, for the District 5 seat.

In the State Senate race for District 4, the candidates are Keith Barenberg, of Colcord; Hoguen Apperson, of Jay; Tom Woods, of Westville, and Tom Callan, of Jay.  The candidate with 50.1 percent of the votes is declared the winner, otherwise, the top two candidates will face each other in August for a runoff.

No Democratic candidate filed for the State Representative District 5, State Senate District 4, or the Delaware County Sheriff’s race.  Unless a runoff is needed, the winner of those races is the elected official.

Also in the November general election, voters will choose between Democratic candidate, Cody Brecheisen and Republican candidate, Larry McElhaney in the County Commissioner race for District Two. In the District Three race, incumbent, Russell Earls, of Fairland withdrew from the race. Scott Hilton, of Afton, will assume the position in January. 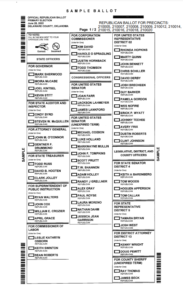