JOPLIN, MO – Emergency crews responded to a fire in a residential neighborhood this morning in Joplin.

“From that point forward we began our operations. We had a successful knockdown, but it happened very rapidly. However, our crews worked very hard and right now we have the incident mitigated. South Jackson Avenue will be closed for a few more minutes as we continue to overhaul and investigate the fire. Then, of course, we’ll release more information as it becomes available.”

The fire was extinguished around 1:00 p.m. this afternoon and no injuries were reported.

The Joplin Fire Department, Joplin Police Department and METS Ambulance all responded to the scene. 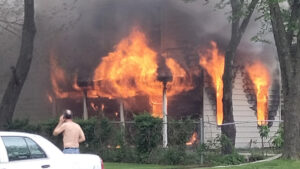