JOPLIN, Mo. — A late-night severe thunderstorm caused damage to homes, businesses and trees inside the city limits of Joplin.

Area fire departments responded to the two homes reportedly hit by lightning, making sure no fires were started by the strike.

In Joplin, the storm caused damage to many roofs and outbuildings, knocked over several small-to-medium size trees, broke large tree branches and cut the power to more than 1,800 Liberty Utility customers.

The highest concentration of minor storm damage occurred along and south of 20th Street, toward 32nd Street in Joplin.

Several residents living near 22nd Street and Moffet Avenue said the winds from the severe thunderstorm, “sounded like those from a tornado.”

Forecasters at The National Weather Service Office in Springfield, MO said the severe storm did not produce any tornadoes, but winds gusting over 50 mph were likely.

By 11:00 p.m. Wednesday night, the severe thunderstorm warning was lifted for Jasper County and Joplin.

The Joplin Fire Department along with crews from the Joplin Public Works Department, responded to several locations near 20th and Main Street to cut up trees that had fallen over residential streets.

By midnight (5/5), Liberty Utilities had restored power to the majority of its customers affected by the outage the severe storm caused. 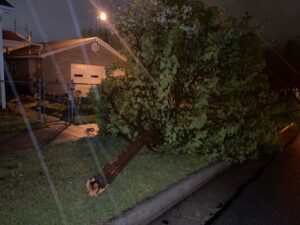