PINEVILLE, Mo. – It took nearly nine hours for a child sex crimes trial to wrap up today, however the jury would only need one hour to reach a verdict.

It was the second and final day of a trial for 63-year-old Robert Pommert, who plead not guilty to a first degree statutory sodomy charge, after his 2018 arrest in Newton County.

During that arrest, Pommert was also charged with first degree statutory rape, however that charge was dismissed.

The initial charges stem from a 2018 investigation where a 3-year-old alleged victim of child sex crimes, detailed the abuse to a forensic interviewer with the Children’s Center.

Today (4/13), individuals took to the witness stand for questioning by the defense team, and the prosecution team.

More than a dozen audience members were in attendance for the final day of Pommert’s trial.

The first witness called to the stand was Stacey Shanks, a former Forensic Interviewer with the Children’s Center.

For nearly thirty minutes, Shanks said she personally questioned the child victim during the recorded session, which a portion of it was played for the Jury.

Next up on the witness stand was Psychologist, Dr. Gabriel Cline, with “Psych Associates” in Springfield.

Dr. Cline said he was highly disturbed by the entire situation, not just because of what allegedly took place, but because of the “poor investigation tactics” used to verify the young girl’s allegations against Pommert.

The last witness of the day was Roberta (Berta) Pommert.

Once Roberta was excused from the witness stand, the Jury took an extended lunch break, and then met back in Judge Selby’s Courtroom around 2:00 p.m. to hear closing arguments.

The Attorney for the defendant, and the Prosecuting Attorney both took approximately twenty minutes to delivered their final arguments.

Before heading into deliberation, Judge Selby gave the jury instructions, which dealt with deliberating, and the rules they would need to follow in order to reach a verdict.

The second (and also last) day of the Robert Pommert trial ended at 3:00 p.m., when members of the Jury left the courtroom to began the process of deciding on a verdict.

After a very short period of time, the Jury came back with not guilty on the only charge Pommert faced: Statutory sodomy.

Pommert’s attorney, Jared Stilley said that his client broke out in tears of joy, after the verdict was read aloud. 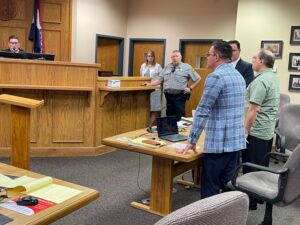