OTTAWA COUNTY, Okla. — Two fugitives that escaped from the Cherokee County Jail Monday night have been located and arrested.

Both suspects were armed at the time of their arrest and are facing additional charges of Aggravated Escape from Custody.

“I can’t commend enough, the incredible work by local law enforcement agencies, the Tri-State Major Case Squad, the Kansas Bureau of Investigation, Kansas Highway Patrol, Oklahoma and Missouri Highway Patrols, the United States Marshal’s Service and the Federal Bureau of Investigation for the non-stop effort to capture these two fugitives this week.”

Tasha Young, 26, of Weir, was also arrested following a Thursday morning search warrant, for her alleged role in the escape.  She is being held without bond on allegations of Conspiracy to Commit Aggravated Escape, Aiding and Abetting and Obstructing Justice. 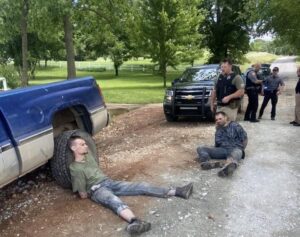