NEOSHO, Mo. (KODE/KSNF) — Search and rescue crews have been out searching waters this afternoon and evening after two are swept away in the waters of Shoal Creek.

As of the time this article was published, authorities have now called off the search for a 12-year-old girl who went under swift water at Lime Kiln Park near Neosho.

Around 4pm Wednesday, the Neosho Police Department received a 911 call about a potential drowning at the park.

Witnesses say the girl was swept under by swift waters and a 34-year-old man went into the water to rescue her.

Authorities were able to recover him.

He was taken to Neosho Freeman and then transported to Joplin where he is in critical condition.

A police officer and fire fighter will stay on scene overnight and a pedestrian light has been set up on the bridge.

Multiple agencies plan to resume the search again at 7:00am Thursday. 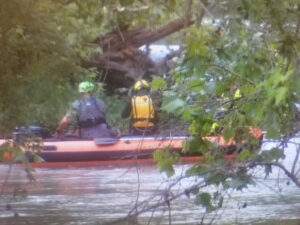