President Joe Biden announced Wednesday that beginning May 1 all troops in Afghanistan will begin their withdrawal from the area. In a nationally broadcast statement, Biden stated that he is the fourth United States president to preside over troops in Afghanistan, and that he will not pass the responsibility onto a fifth.

When Biden entered office, he “inherited a diplomatic agreement dually negotiated between the government of the united states and the Taliban that all U.S. forces would be out of Afghanistan by May 1, 2021,” Biden said. “Just three months after my inauguration. That’s what we inherited, that commitment. It’s perhaps not what I would’ve negotiated myself, but it was an agreement made by the United States Government and that means something. …”

The troops will be fully withdrawn by the 20th anniversary of September 11. This will also end the 20-year military relationship between the United States and Afghanistan, according to NBC. Biden said that when withdrawing they “will not conduct a hasty rush to the exit” but instead will “do it responsibly and safely.”

“We went to Afghanistan because of a horrific attack that happened 20 years ago,” Biden said. “That cannot explain why we should remain there in 2021.”

According to NBC, there are 2,500 troops currently serving in Afghanistan—the lowest number since 2001—compared to 98,000 in 2011 at the height for the war. Biden said the plan has always been “in together, out together.” 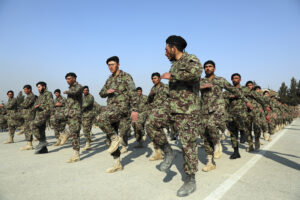