BENTON COUNTY, Mo. — Benton County Sheriff Eric Knox says the death of Darrell, Mayson, and Kaiden Peak appears to be the result of a murder/suicide.

The medical examiner is working to confirm that as the cause of death. Sheriff Knox did say he would not discuss the manner of how they died.

Utility workers in the area confirmed with Sheriff Knox that the three were not in the shack Saturday.

Darrell, Mayson, and Kaiden Peak’s bodies were found in a shack just off Highway 65 north of Warsaw.

The three went missing Thursday after the dad wrecked a family car and took another car the two boys were already in. Throughout the weekend, the three were seen walking along Highway 65, and Darrell refused assistance when authorities went to talk to them.

On February 28, Darrell was charged with two counts of parental kidnapping. 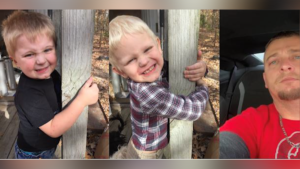