SOUTHWEST MISSOURI — Some drivers in Southwest Missouri have been targeted by vandals this week – and now authorities are on the lookout.

It’s scary enough when you’re behind the wheel and a small rock hits your windshield. But something much bigger struck this car windshield, startling the driver Wednesday. And unfortunately, the same thing has been happening to other motorists as well driving highway 43 in Newton County between the Petro Truck Stop and Seneca the last few days.

James Altic, Seneca Police Chief, said, “We’re lucky that somebody hasn’t been hurt real bad or killed, I mean some of these have destroyed the fronts of cars, we’ve had numerous windshields knocked out, the grills knocked out, it’s dangerous, it’s very dangerous.”

In fact, Altic says some victims have been hit more than once.

“We had one victim get hit coming into town and going out of town on two separate days.”

Altic says this is a photo of one of the pick up trucks that could be involved in the incidents. But cars aren’t the only vehicles that are getting targeted. This Seneca school bus was struck Thursday morning on 43 Highway going 55 miles an hour and Travis Vanwagner says it could have been disastrous.

Travis VanWagner, Transportation & Maintenance Director, Seneca Schools, said, “You get hit in the windshield with something, what ever was thrown, if it spooks the driver, that could cause him to go into the ditch, wreck, you know, you your taking kids lives in danger, it’s just ridiculous of people doing this, it’s crazy.”

Chris Jennings, Newton County Sheriff, said, “I’m assuming it’s probably a bunch of kids that have seen something on TiKTok or something and now they’re trying it, but they don’t realize how dangerous it is and how close they can come to really hurting somebody, a frozen water bottle is just like throwing a rock at somebody, it’s a deadly weapon, and we will pursue it and prosecute it like it is.” 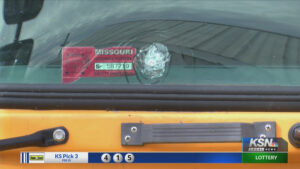