Each of these items will be further discussed and brought back to council at a city council meeting before anything is passed or implemented in the city. The City Action Plans included seven goals with a total of 46 strategies, all set to improve the City of Joplin. Project Launchpad is the repurpose of the downtown Joplin library in order to create entrepreneurial “synergy” within Joplin. The Parks Master Plan addressed five recommended goals and their action plans in order to improve Joplin’s parks.

Nick Edwards, city manager, introduced the City Action Plans to council and said they are important because the community wants change, they create credibility and trust, and the city needs to reverse decline and improve trajectory. Edwards explained the City Action Plans were created based on citizen feedback, the goals were identified by council during a workshop, and the plans were developed by “passionate” and “engaged” employees.

Before discussion, Edwards stated he wanted to hear by the end of the night the action plans that council likes and dislikes so council may continue to discuss those action plans next month. He said he hopes to have a formally approved set by May.

Council held lengthy discussion for the action plans as they were presented, affording council to adjourn the work session at 11 p.m. after discussing 26 action plans, with 20 left to discuss. Council will reconvene Monday, March 8.

Teeter described that the idea of this repurpose would be to launch culinary startups, entrepreneurs, careers, Joplin’s digital workforce, and access to opportunities. Teeter was supported by both Dean Van Galen, MSSU president, and Melinda Moss, Joplin Schools superintendent. Other aspects that would be included in this project are a small business development center, an internship hub, Center for Advanced Professional Students (CAPS), and more. Van Galen stated that this would act as the new “front door” for MSSU to engage with business as well as engage with prospective students and the community. Moss spoke in support for the project, specifically for the CAPS aspect, as this would allow high school students to receive dual-credit and hands-on experience with local businesses.

Project Launchpad is estimated as a $10 million project. Teeter explained that they currently have two outstanding grants, including one through the U.S. Department of Labor and another through EDA Scaling Pandemic Resilience Through Innovation and Technology (SPRINT) Challenges.

Paul Bloomberg, Joplin Parks and Recreation director, led the Parks Master Plan in addressing the ways in which to improve Joplin’s parks. This included five goals, comprising of: Develop Destinations, Improve Connectivity, Prioritize Safety, Educate the Masses, and Cultivate Health & Wellness. These goals were created after looking into the city’s public engagement, the community profile, system inventory, and system analysis.

From these goals they produced a project list to address each of the five goals. Some of these projects included Schifferdecker Park improvements, a fishing pond at the Athletic Complex, playground improvements, security cameras and lighting, fitness trail and outdoor games, and much more.

Leslie Haas, City of Joplin finance director, presented on the next steps for the Parks and Stormwater Sales Tax Renewal. Within this discussion, council decided they need more information regarding the Ewert Aquatic Center project before they could include it for approval in the sales tax renewal. 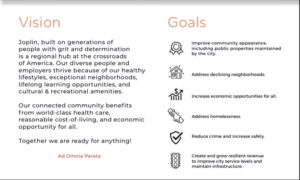