Bykota REI LLC is the parent company based in Colorado of brothers Sawyer and Sullivan Smith’s subsidiary Blue Haven Homes based in Joplin. The two brothers plan to put a $6.5 million investment into redeveloping the Olivia into new apartments for the Joplin community. Sawyer said the project acts as a bridge between downtown and the Murphysburg District.

“I certainly hope the community will celebrate this award, this contract, this development proposal,” said Nick Edwards, Joplin city manager. “It is investment that is flowing into the community that otherwise probably wouldn’t have happened. In fact, it probably would’ve resulted in a net decrease with a loss of space, so this is a good thing for the city of Joplin. We certainly hope and wish the developers all the success possible and hope this will be one of many projects they can do. We do have to be mindful of the expenditures and the requests and the incentives that we’re giving, that is not something that is done easily and we have to pay close attention to that.”

Following a fire in December 2020, which damaged the Olivia Apartments and destroyed the roof, Bykota agreed to reconstruct the roof by June 15, 2021. Sawyer stated their estimated date of completion for the redeveloped Olivia apartments is March 1, 2023.

Council also passed a resolution allowing the Joplin Police Department to apply for three grants through the Missouri Department of Transportation (MoDOT) Highway Safety Program to go toward further efforts in reducing crashes, such as DWI’s.

Two additional bills passed as emergency ordinances, both with a unanimous vote. A bill under first reading also passed with nine in favor to move on to second and third reading. Council also approved, with nine in favor, the Parks and Stormwater’s citizens committee

Lori Haun, Downtown Joplin Alliance executive director, presented the Downtown Joplin quarterly report. In her presentation she six topics: looking back, Endangered Properties Program, going on now, Empire Market, upcoming events and activities, and looking to the future. Haun pointed out that one of their big achievements in 2020 was the Endangered Properties Program, in which their main focus was the Olivia building. The creation of the Empire Market in 2018 was another achievement, which Haun said is still growing, including available community gardens. They also furthered downtown branding with new banners and were awarded “Best Creative Placemaking Project” for a mural completed in 2019 on 6th and Virginia tilted “& at Night, We Glow.”

Haun also discussed in upcoming events for Joplin that this includes bringing Third Thursday back. The next Third Thursday is tentatively scheduled for April 15, 2021. The event will follow local guidelines and those from the CDC. There will be a limited number of venders present, with extra spacing available. Additionally, she said there are several smaller projects and expected development to come in the future, with goal of creating a vibrant downtown for Joplin.

Ryan Talken, Joplin Health Department director, provided an update regarding COVID-19 in Joplin. Talken said the COVID-19 numbers in the cities are “encouraging,” as they are improving. He said that now the city has on average 7.43 cases per day, compared to just after the winter holidays when the city had on average 43 cases per day. Currently, there has 36 people in isolation, nine of whom are Joplin residents, and the city has a total of 50 active cases.

Regarding COVID-19 vaccines, Talken said 10.5 percent of Missouri’s population has received the vaccine—which he said is a good amount so far. He presented that 10 percent of Jasper County has received the COVID-19 vaccine and 4.4 percent of Newton County has received it. A community vaccine clinic for those who received their first dose of the vaccine at the previous clinic was canceled due to weather. Talken said this clinic will be rescheduled in the next week or so. He said those who received their first dose already should not worry about their second dose being postponed, that there is no concern. Talken said they are also working on creating vaccine phone banks for those who have no internet. Hospitals are still getting the bulk of the vaccines, but according to Talken stores like Walmart are starting to receive the vaccine—and some already have.

Lynn Onstot, Joplin public information officer, presented that the Joplin Fire Department has launched a community survey that the public is invited to submit. The survey’s deadline is Friday, February 19. There will be a community COVID-19 testing site at Access Family Care February 19 from 9 a.m. to 1 p.m. Individuals must be a Missouri resident to attend. Additionally, Republic Services is asking Joplin residents to put their trash on their curbs, as they are working to catch up on their services from the past week. 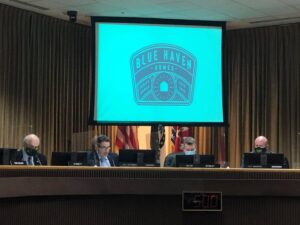